School Board’s Coyner blends equity, social justice and the GOP in bid for House of Delegates 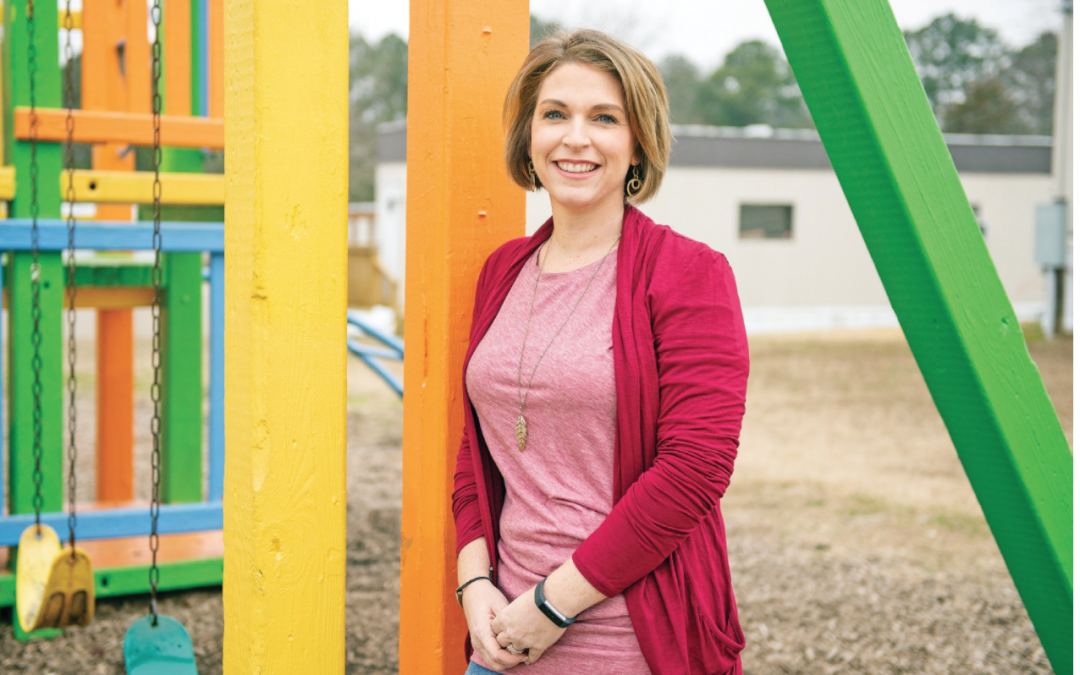 It’s just after 10 o’clock on a chilly, gray Saturday morning, and other than a haggard-looking cat sauntering across the road, there are few signs of life stirring at Greenleigh, one of several mobile home parks located along Chesterfield’s stretch of historic U.S. Route 1.

Inside a double-wide trailer adjacent to the community playground, county School Board member Carrie Coyner sits at a white plastic table with a young Latina girl and quizzes her on colors and shapes. Several boys are working at another table, decorating sheets of paper they will eventually fold into airplanes and send flying across the room. Their mothers sit nearby in metal folding chairs and chat in Spanish.

Some 48 hours earlier, when the Observer interviewed Coyner at her law office about her recently declared candidacy for the 62nd District seat in the Virginia House of Delegates, she was in attorney mode: dress, heels and makeup. But she seems even more in her element here, in jeans and canvas shoes, interacting with children at the Greenleigh Learning Center.

It’s an unusual setting for an up-and-coming Republican politician. Coyner, 37, is carving out a platform, and building a base of support, in the lowest-income corners of Chesterfield.

And it’s not a come-lately act. Coyner helped launch the center in 2012 through a partnership that included Elizabeth Scott Elementary School Principal Joan Temple, the Chester YMCA and Chesterfield Police Capt. Kevin Smith. Their objective was to provide a central location for Greenleigh’s heavily Hispanic elementary and middle school student population to receive additional academic support after school. The center, which is staffed by volunteers and operates solely on donations, receives no tax dollars.

Coyner helped establish a similar program in Broadwater Townhouses, a subdivision with subsidized housing on Harrowgate Road. Broadwater’s learning center is now run by staff at nearby Carver Middle School. She also partnered with Chesterfield County Public Schools employee Amy Bartilotti to start a summer reading program that provides books for economically disadvantaged and at-risk students. As part of the program, churches and other groups adopt neighborhoods and throw “reading parties” throughout the summer months.

Coyner’s face lights up when Cindy Marroquin, the Greenleigh center’s first student participant, stops by for a visit Saturday morning. Coyner still has a photo of the two of them saved in her phone: Cindy, now a sixth-grader at Elizabeth Davis Middle, was in kindergarten at the time; Coyner was in her first year as the Bermuda District’s representative on the Chesterfield School Board.

“Look how much older we are now,” Coyner says, and they both laugh.

A few minutes later, despite paper airplanes whizzing by their heads, the conversation momentarily turns more serious as Coyner explains to Cindy and her friend what it means to run for the House of Delegates and why she’s doing it.

“I’m going to be walking around neighborhoods knocking on doors and asking people to vote for me,” she says, “so I can make sure everyone in this community has a voice.”

More specifically, Coyner says she thinks she can have “a larger impact” on the state level by applying her skills, knowledge and experience in the areas of education, affordable housing and job creation, while working to secure equal rights, justice and opportunity for all Virginians.

“My service is driven by a deep love of the people who live here,” she said. “Decision-making becomes much easier when you step out and really get to know the people in your community. It can’t just be people in your neighborhood.”

All the feel good Friday vibes! Enon Elementary School has been a staple in our community for generations! I’m a proud Enon gator too ❤️🐊 ... See MoreSee Less

This is so great! Congratulations and I’m sure Jenifer is beyond thrilled. Time flies…we went to his baby shower! 💙

Oh my goodness! This is so wonderful! Best wishes!❤❤❤❤

Home sweet home! So many beautiful people and memories!

I love this!! He sure has had the best role model! If he follows in Mrs Williams footsteps he will be an amazing teacher!

Today I attended the Fort Lee Civilian Military Council where we honored citizens and businesses who have gone above and beyond to welcome and care for our military families in the Tri-Cities area! Lots of great updates on issues impacting Fort Lee and our surrounding counties and cities. Check out the flyer for the community day on August 27th! ... See MoreSee Less

Much deserved recognition of an amazing family-owned business in our community! ❤️Family-owned, Waller Tire, has been around for 39 years and continues to keep people rolling!

That is an understatement by Mr. Waller, you treat everyone great. One of the few places in a large urban area where you get good old fashioned home service. They are the best!⭐️⭐️⭐️⭐️⭐️

Used them for years, always happy with there work!!!

I Always had great service with this company!

Mr. Waller is the best! I got my tires from him and he's so very nice!! I highly recommend his services!!

I've been getting my tires there for years. Always enjoy talking with Ray Sr. 😎

We use them whenever we can great people 

Yes they are...I've used them many times...and will deal with them for as long as they are around...GOOD PEOPLE.....

I have patronized their business many times and I could not agree more.

Love them!!! Hardest working family in Chester! (Besides the Emerson’s!😉)